Enesi Pharma recently hosted a crew from Asahi TV, one of Japan’s leading TV channels, at its Oxford, UK facility to talk about the potential of its ImplaVax® solid dose needle-free vaccination technology. The conversation coincided with the approval of the Pfizer/BioNTech COVID-19 vaccine Comirnaty® in Japan and potential dose-wasting issues linked to the type of syringe used in Japan to administer the vaccine. 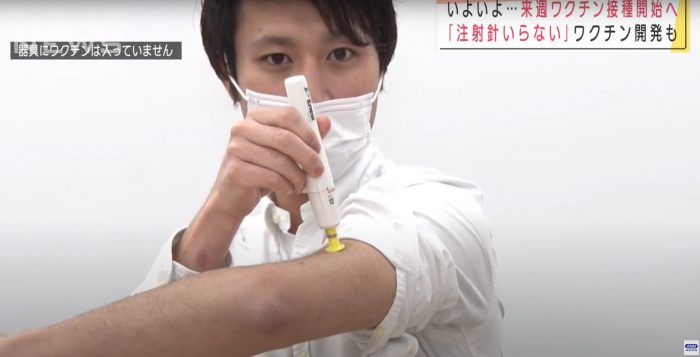 The translated transcript of the video is as follows:

“Vaccination will finally begin in Japan next week, but the development of new vaccination methods that are quick and easy to use are under development.

Mr. Tamura, Minister of Health, Labour and Welfare, said: “We would like to have discussions at the Pharmaceutical Affairs and Food Sanitation Council on the 12th and tomorrow, enter the approval process.”

It is expected to be officially approved on the 15th February, and the government will begin inoculating medical personnel by the middle of next week.

However, there is also a problem with Pfizer’s vaccine. It is to do with the shape of the syringe secured by Japan; some of the vaccine remains at the tip of the needle, and therefore only five doses can be extracted from each vial instead of the six scheduled, reducing the number of people who can be inoculated.

To address this situation, a breakthrough development is progressing in the United Kingdom. Enesi Pharma, a British pharmaceutical company, is developing the world’s first needle-free unit solid-dose vaccine, which eliminates all wastage.

Presenter: “It’s a vaccine that doesn’t need a needle. When you press this against your arm, the unit solid dose vaccine is injected.”

The novel solid vaccine consists of a dissolvable ‘micro-implant’, which is approximately 0.85 mm in diameter and 4.0 mm in length. Injected transcutaneously in under 1 second in ‘a pain-free manner’, it is much easier to use and operate than a traditional needle and syringe. The solid-dose vaccine is also thermally stable up to 40OC and can significantly reduce or eliminate the complex cold chain logistics associated with vaccine supply and deployment.

Enesi Pharma hopes to start clinical trials as early as the second half of this year and, if things go well, hopes to begin supply by the end of next year.”